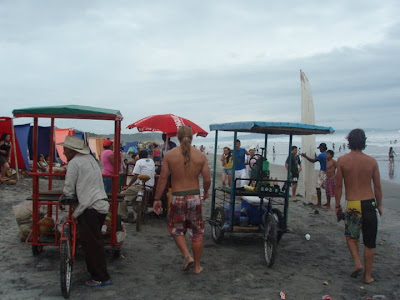 Ehren and I took the night bus from Quito to Bahia which we were told was close to our destination of Canoa. We had no plan and no idea where we were headed, but so has been the way of Ecaudor so far. The bus ride was abnormally bumpy for us gringos in the back and the smell of cheap air freshners didn't help us feel comfortable but we arrived safely in San Vicente before la madrugada (dawn). We grabbed the first mototaxi that passed and made our way to Canoa in the dark, with the smell of ocean air heightening our intrigue of what we were to discover come day time. We knew little of the surf and fishing town but hoped for prospects of work and board. We first found Olmito Hostel where our friend Nard was staying and then found hammocks to finally get some peaceful sleep. 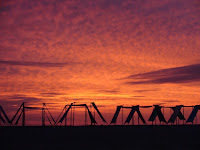 Once the sun was up, Canoa appeared to be quite the sleepy town on this Sunday. The streets were dead and all the food shacks on the beach were closed. Little did we know this was all going to change in a few hours. After meeting up with Nard, we began to explore the two street town of Canoa. It didn't take long, before noon actually, to have our first celebratory Caipirina. What exactly we were celebrating, I'm not quite sure, maybe just the pleasure of being on the beach again and in the sun. Not long after this, Ehren and I passed by the Surf Shak. We started chatting with one of the owners who is from Ft.Collins. After a few minutes, we had jobs working at the restaurant and free beds located above the establishment...easy. The rest of the day continued like the first day of spring break. A few more caipirinas, playing in the ocean and meeting Ecuadorians, which thanks to some liquid courage allowed our Spanish to practically spill out of our mouthes
﻿
﻿ Having been her for almost two weeks now, it is easy to see that this is the type of place people get stuck in. I talk to people daily who had intentions of leaving and then extended their stays...first it was for two weeks, then a month and five months later they are still here. I realize the importance of presence but sometimes I feel anxious when I think about leaving. It is only a sign that I really enjoy it here and maybe I have been secretly looking for reasons to stay longer. Ask and the universe shall give...yesterday a friend of mine asked if I would be willing to house sit for here while she returns to the states for a few weeks. Lisa, is awesome California hippy who is opening up a hair salon right next to the Shak. It is something she has been manifesting for some time, the spa aspect is only the catalyst for creating a sanctuary where local and traveling women can come to beautify and spend some (often much needed time) with other like minded ladies. She also let's me use the space to practice and teach yoga classes.
There are very fews problems to be concerned with here. So while there are devasting landslides in Brazil and snow storms in New York, inhabitants of Canoa ponder future travel plans and whether or not the surf is good. But even the surf conditions give us little stress. High tides and low tides don't usually determine whether or not you should go out. The waves are great for beginners and almost always present and good. It's also a nice perk to be able to see them at work or from my balcony.
We have a good group of amigos and the owners at the Shak are awesome. Two are brothers from Sweden and the others are a couple from Colorado. For some reason there are an abundance of Sweds ﻿
﻿here. Getting to know these blonde haired, blued eyed, fist pumping people has added yet another country to my list of travel aspirations. Ecaudor is also the same size of Colorado and ColoRADo-ans are almost as common here as Sweds although it is nice that there are not too many Americans.
﻿﻿
﻿﻿ Working at the Shak is...chill. I work hard for my $1/hour. I roll out of bed, throw on a bathing suit and go downstairs to serve other gringos, ex-pats and visitors of Canoa. I am still getting used to being offered beer at work. Our first night of training actually started with a beer. The thought has crossed my mind a few times that a month here could undo years or fine dining experience but oh well. Some nights after a few banana coladas, the tables are quickly moved out of the way and with dj-ing by the Sweds, the dance revolution begins.

BUT the music here would by my only complaint. The local food huts on the beach and bars blare maybe five songs that they choose to play on repeat at deafening levels. The music has an awful 'doof doof' beat that you may begin to hear as early as 9am on the weekends. But on the weekends, Canoa is an entirely different place in general. Mondays almost feel like a ghost town after the weékends. Ecuadorians come in by the bus loads to soak up the sun and play in the ocean in thier street clothes. 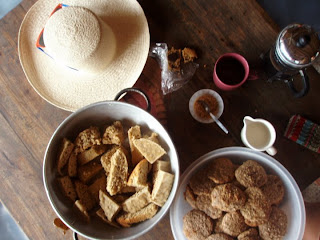 We have also made some pretty great food discoveries. The fresh fish soup served with plantan chips, encebollada, is delicious and only $1.50. Setting you back three quarters are the curry chicken empanadas and the coconut ice creams bars are always a refreshing treat during the hot days. And now, Ecuadorians have been exposed to the almost world famous Cookie Wookies and new and ever improving Pan de Banano. Team Gnar Gnar and Nard hit the beach and sell our freshly baked goods. The outcome - still not sure if they buy them because they were really hungry or because they are intrigued by

the gringos on the beach. Every two attempts we were greeted with emotionless, blank stares and a quick shake of the head. Then the next group of people will be really warm and entertaining. During these time, they usually buy a lot and inquire about what were doing. This usually ends in laughs, a good Spanish exchange and enough photo taking that we should start charging. All around, a success. Even with the tropical drinks we enjoy along the way, we make a few bucks and the motivation to make it a Domingo tradtion while we are here. 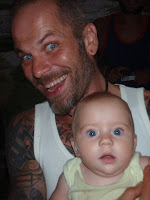 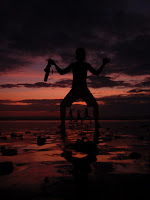 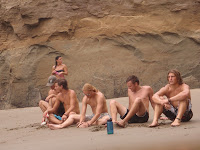 ﻿﻿﻿﻿﻿﻿﻿﻿﻿Other than the occasional 'work' day and surfing a few times a day, the days can be whatever you make of them. Yoga and meditating on the beach is always accessible with the energy of sunset my favorite time to practice. Not the mention the heat is intense during the middle of the day which gives everone a good reason to nap and rest. In the afternoons a few times a week I attempt to teach English to a local kid, Willy, which naturally allows me to work on my ever improving Spanish. Some other afternoons I explore the few streets of the town meeting local kids along the way or I will make je﻿﻿﻿﻿﻿﻿﻿﻿welry with the traveling artisians who have made Canoa their 'home' for now. The life here is happy and easy. My soul has had time to settle in here and it is a nice change of pace to get to stay somewhere for a while with no reason to leave. This gives me time to reflect and grow in a knew way than before. I see that I have purpose here and this gives me more space and energy to give back. 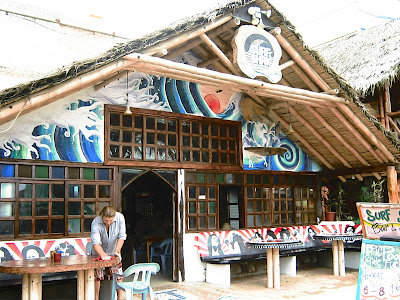 Add comment
Load more...
Newer Post Older Post Home
Subscribe to: Post Comments (Atom)
"There is no need to search; achievement leads nowhere. It makes no difference at all, so just be happy now! Love is the only reality of the world, because it is all One, you see. And the only laws are paradox, humor and change. There is no problem, never was, and never will be. Release your struggle, let go of your mind, throw away your concerns and relax into the world. No need to resist life; just do your best. Open your eyes and see that you are far more than you imagine. You are the world, you are the universe; you are yourself and everyone else too! It's all the marvelous play of God. Wake up, regain your humor. Don't worry, you are already free!" - Way of the Peaceful Warrior

The Past Leads Us Here